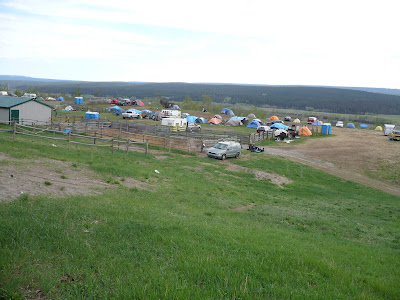 In piece work, it is said, you eat what you kill. You work hard, you earn more. It is all up to you. The best rise above the rest and enjoy a special status: the highballer - the person who plants the greatest numbers and earns the most. When presented with grievances about money from lesser planters, management will quickly point to the highballer: as Kayla did in conversation with me the other day.

I have been a highballer and remember having the same attitude. When you're on top it's always because of your ability. This is probably the ego's natural reaction to success. When you are at the bottom, I am learning, the ego acts in a similar self-serving manner. You aren't there, in the dumps, because of your lack of ability god forbid; you are down because an injustice or an external and uncontrollable circumstance is holding you down.

Our crew seems to be getting the short end of the stick. I have been dissatisfied. We have been dissatisfied. Mostly Caroline and I have been dissatisfied. We are the most willful and competitive of the bunch. Here is our beef: Firstly, we are being sent to blocks with tree averages far below what we feel like we can plant. For example: if we are sent to a 6000-tree block (as happened last shift), and there are six of us, there is a 1000 tree average imposed on us before we even bag up. That means (at a tree price of roughly seventeen cents) that we will make an average of one-hundred and seventy dollars. To me, this is not enough. Secondly, we feel that we are being asked to plant higher quality trees than the rest of camp. We are constantly replanting, which further hurts our paychecks. We feel that we are coming to be relied upon as a 'quality crew:' a group of janitorial lowballers who clean up the small blocks.

This problem is systemic. We are a six pack in a camp with two other full crews: one with 15 mediocre planters, and another with 25 solid, veteran planters. The other two foremen have been doing this for a long time, and enjoy seniority over Kayla. We know that when the higher ups (the supervisor in conjunction with the three foremen) are making their decisions we are, in lieu of our small size, the final consideration (we are producing probably 1/6th of the total, with the other crews doing 1/2 and 1/3 respectively).

Lately, near Caroline's sleeper van, we have been discussing our lot, and have drafted a formal complaint stating that: “We, as a crew, feel that we are not being allowed to 'reach our potential ('s)' as planters, and thereby earn enough money to be happy with our season thus far. We have also agreed that 'administrative adjustments' must be made in order to enable us.” If not, the implication is, we will have to do something about it.

We had Caroline, a soft talker and veteran planter, present these arguments on our behalf.

Meanwhile, we finished off our trees out at Alexis Creek, and have packed up and set up a new camp at the Chief Will-Yum campsite just south of Williams Lake. We are all a little happier with this location, as it is merely ten minutes from town. This greatly elongates the amount of free time we have on day off, as before we were driving an hour-and-a-half each way, to Williams Lake and back. It also has a pay phone and laundry facilities, and I will be happier to have the opportunity to talk to Lauren on a daily basis.

It is unclear whether things will improve. We have stuck out our necks and stated our case. I am not sure where this will take us. Caroline tells a story about a crew that was in her camp last year. She said that they low-balled the camp every day, and still had to replant all of the time. They were undoubtedly forced to a higher quality standard than the rest, owing to their small numbers and anal-retentive crew boss.

'What happened with them' I asked her.

'Eventually they just got fed up and everybody quit.'
Posted by Adam Humphreys at 12:37 PM