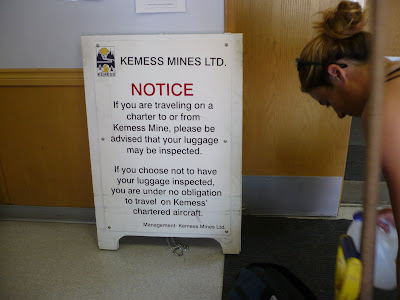 Prince George is in some rolling hill type mountains, spreading flat and shapeless to my eye in the airplane above and approaching from South-South West, and I arrived there at 10 in the morning on the seventh of August. I was instructed to be at the Rhino HQ at around 11, and was the last to arrive, in a large 15 passenger 'airporter' van driven by an obese and friendly native of the city. He was halfway through a sombre discussion of the downtown drug problem when I saw my colleagues and colleagues to be waiting in a parking lot. Cam was glad to see me, as I had not been in touch over the four days off, and he asked me if I had done my WHMIS test, and I said yes, I was all ready. He told me we would be flying out at 5pm, so we had a lot of time to kill.

There was Cam and his pretty, blue-eyed girlfriend Colleen, Jen, Simon: a 32 year old tall Quebecois man with red hair and a raspy voice, Benoit: another Frenchman in his 30's with a thick scar across his eyebrow and forehead, funny and talkative, and Nick Verberne: 'Bernie' a stout, happy go-lucky Ontarian with a booming voice. They were all, or had all been foremen at some point. They were all heavy, heavy smokers. I went from being the oldest person on my crew, all summer long, to the youngest by far, which was a relief.

We got to the airport almost late, and the person weighed our stuff. There was a sign near the door you walked through into the hanger that instructed us that our baggage could be subjected to search - we had previously been told that Kemmess was a dry-camp, that as soon as you were caught with drink or drugs was as soon as you were on your way home. I looked at Benny and Simon as they handed over their bags with a little bit of anxiety and a measured politeness. We walked out and felt a bit like Indiana Jones. 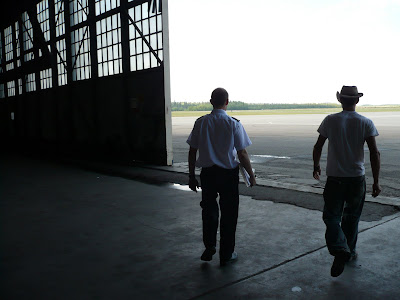 We took off and were in the air for about one hour, flying North, North-West. After a while we saw mountains. 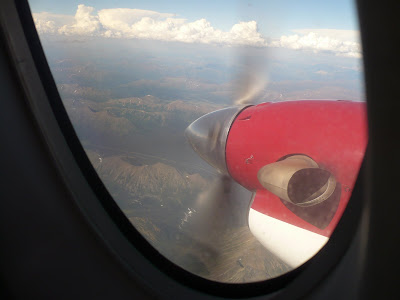 The trees were smaller. We landed on a gravel runway and there were a bunch of other planes lined up. There was no bathroom on the plane, and a few people went straight to a nearby trailer to find one. Outside the trailer three school-buses, orange and black, opened their doors and people with bags came spilling out onto the gravel. Working people in denim and such, having finished their shift at the mine, on their way back into the town to see their families, one could presume. Then, we got onto the bus with all of our things and drove down a very, very wide clay road, on the left hand side, which was awkward, but, it turns out, purposeful (at mines they drive on the left hand side, so that when big vehicles collide head on, the drivers sitting on the left of them are clear of the impact and thus safer). It was much colder here, in the Northern Rockies, than it had been in Prince George, as we got out and moved our things towards a Gazebo bordering six or seven rows of ATCO trailers, each around 300 feet long, each holding about 50 small dormitory style rooms. We checked in, and went for dinner.

The eating area resembled a high school cafeteria, all bubbly frying sounds, linoleum and aluminum; only this one had great food and no cashier. We sat down, all of us planters at a round table, and ate gigantic meals. There was excitement around the table at the prospect of eating so well. There were tons of things to choose from. Three or four main courses, juices, a refrigerator full of different cakes, and pre-made sandwiches all promised to make our stay comfortable. The initial giddiness was slightly tempered by the feeling of being different, being watched. We conversed about what the miners might have thought about us. Our occupations are not that unalike, it was said: we are both primary resource laborers, both stationed in remote worksites. Only there is a difference. We stood out. We had beards and were far skinnier. We had two Frenchman, and two young women in our midst. There was a tension, especially in the eyes of the younger miners. An unstated conflict. 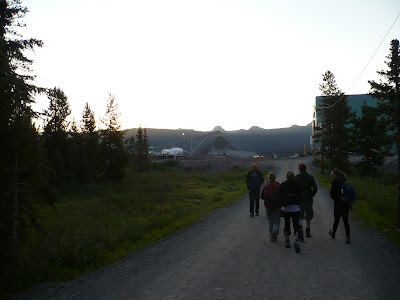 We walked past all of the things at the mine: the pile of rocks, continually growing under a large conveyor-belt, crane mechanism, the gigantic trucks, 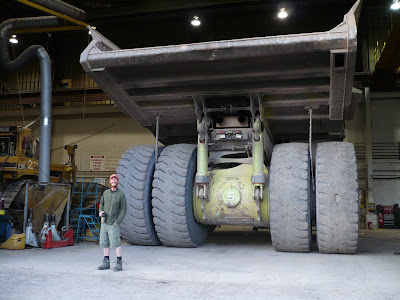 the smaller trucks, the contorted looking backhoes and rippers and other yellow steel structures that looked like giant tropical insects, the piles of 10 foot tall tires, the rocks, etc. Past the insignias and logos in the hallways, the logo of a gold river running through the mountains, the motto: safe production. Our orientation lasted three hours. We watched videos about industrial accidents, with graphic reenactments of the injuries and swearing. We watched the Bear Aware video - everyone had seen it before - and it was great, as usual, watching the big brown and black bears flop around.

We were told there were a couple of Grizzly Bears that liked to visit camp, that we should watch out. One in particular had been seen by many, and the miners had named him Rufus. We all drank coffee and laid our heads down on the table, jesting frequently. The videos were well produced, but their message redundant. They went on and we jested less frequently, laying our heads on the table. After a while we stopped talking. 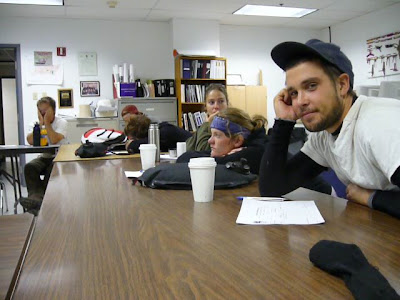 At 9 we drove, and on the way to our trees we saw Rufus grazing in some grass near a set of pipes, facing towards, his head bordered by his large round shoulders, brown all over, face down looking for something, and swaying to and fro as he gently moved about. He looked soft and cumbersome, like a giant labrador.

Our reefer was on a high road, and overlooked the dam, or rather, the back side of the dam, that we were to plant for the next ten days.

It looked really good, but turned out to be so-so in places and good in others.
Posted by Adam Humphreys at 10:50 AM